On 19/4/2020, the Conegliano Laudense Seismic Network recorded some seismic events that occurred in the Pavia and Romagna Coasts. The strongest event at 09:53:40 UTC (11:53:40 Italian time) occurred in Montalto Pavese (PV), approximately 24 km south of Pavia; it was an earthquake with magnitude M 3.7 (source: terremoti.ingv.it). The seismic signal produced by this earthquake was distinctly detected by the stations of the Cornegliano Stoccaggio seismic network, which is more than 40 km from the epicentre. Below, we show as an example the seismograms (daily traces in helicorder form) recorded at the OL02 station on the same day. The seismograms are filtered with a high-pass filter (above 1 Hz). The event fits into the context of the northern Apennine front whose seismicity is documented even in the instrumental age and tends to be localized in depth (see the image of the instrumental seismicity from 1985 to date shown by the INGV in the page dedicated to the event). This seismic event was located more than 40 km from the Conegliano Laudense storage site and at a depth of 32 km, quindi si può escludere un legame con le attività di stoccaggio.

In the same area, another event occurred at 05:16:34 UTC (07:16:34 Italian time). This event, of magnitude M 2.9 (source: terremoti.ingv.it), occurred near Brallo di Pregola (PV), 47 km southwest of Piacenza and 53 km south of Pavia. In the figure, we can recognize the trace relative to this seismic event, even if the amplitude of the oscillations is smaller than that of the previous event due to the lower magnitude and the greater distance. The signals of these events are also recognizable in the seismograms from all the other stations of the Cornegliano Stoccaggio seismic network. The earthquake occurred in an area not far from that of the earthquake of 16/4/2020, which was also reported on our page (16/04/2020 Seismic event of the Apennines of Piacenza). These events are part of a well-known seismic framework with relatively recent events of even greater magnitude than today (e.g., M 4.6 on December 23, 1980) (source: ingvterremoti.com). Given the long distance of Cornegliano Laudense from the epicentre, any correlation between this event and the ongoing gas storage activities at the Cornegliano Stoccaggio site is excluded.

Today, the RSCL recorded a seismic event of magnitude M 2.8 (source: terremoti.ingv.it) on the Romagna Coast at 03:27:02 UTC (05:27:02 Italian time) approximately 19 km north of Rimini and more than 250 km from the site of Cornegliano Laudense. 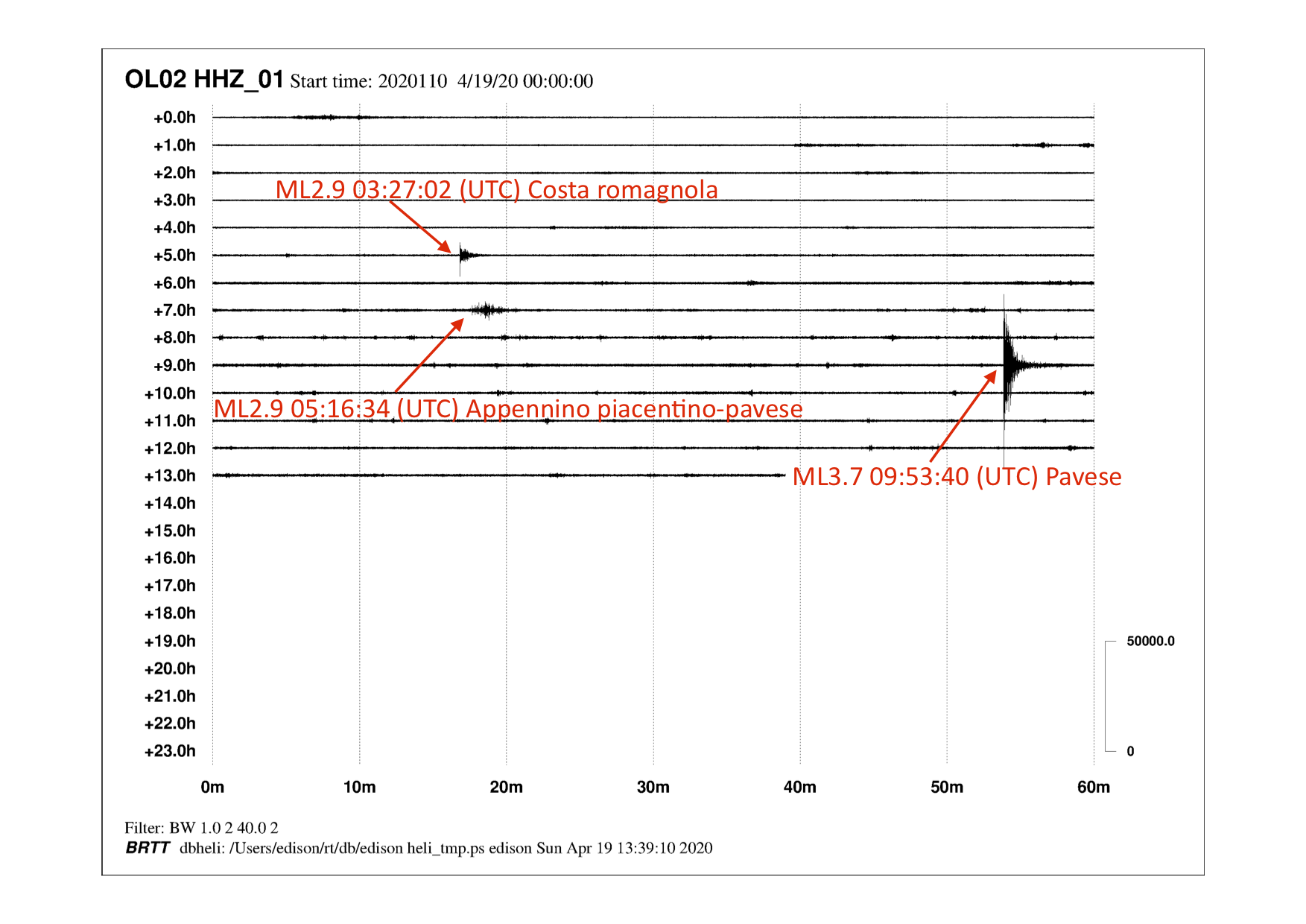 Daily tracks (vertical component) recorded on 19/4/2020 by the OL02 station, filtered with a high-pass filter at a minimum frequency of 1 Hz.