Here are the main characteristics of the satellites used for DInSAR analysis. Two groups of satellites may be distinguished based on their period of operation: the ERS-1, ERS-2 and ENVISAT satellites and the Sentinel-1 satellite constellation, which currently includes two satellites.

The ERS-1/2 and ENVISAT sensors

The three satellites ERS-1, ERS-2 and ENVISAT were developed by the ESA to monitor the Earth from space. ERS-1 (European remote sensing satellite), the first of the three, operated along a polar orbit from July 17, 1991 to March 10, 2000, far exceeding its expected lifetime. ERS-1 carried an array of instruments for the observation of different environmental parameters of the Earth (water, earth, ice and atmosphere), including a SAR sensor operating in the C-band (wavelength of 5.6 cm), which acquired images with a revisit time (time required for the same scene to be illuminated in two consecutive passages) of 35 days.
On April 21, 1995, the ESA launched into orbit a second satellite, ERS-2, twin of the first, which operated until September 5, 2011. ERS-2 shared the same orbit as ERS-1 but with a time lag of 24 hours; in this way, the same scene on the ground was observed on consecutive from the two satellites and every 35 days from a single satellite.
Subsequently, the ESA developed and put into (polar) orbit a third satellite, ENVISAT (Environmental Satellite), which, like its predecessors ERS-1 and ERS-2, was characterized by a revisit time of 35 days. Among the various measuring instruments mounted on board, ENVISAT was also equipped with a SAR sensor operating in the C-band (wavelength of 5.6 cm), whose characteristics allowed the acquisition of images in continuity with the past (i.e., with the images collected by ERS-1 and ERS-2). ENVISAT operated from March 1, 2002 to April 8, 2012.
Figure 1 shows a simplified scheme of the revisit interval of the ERS-1, ERS-2 and ENVISAT sensors with the corresponding lifetimes indicated. 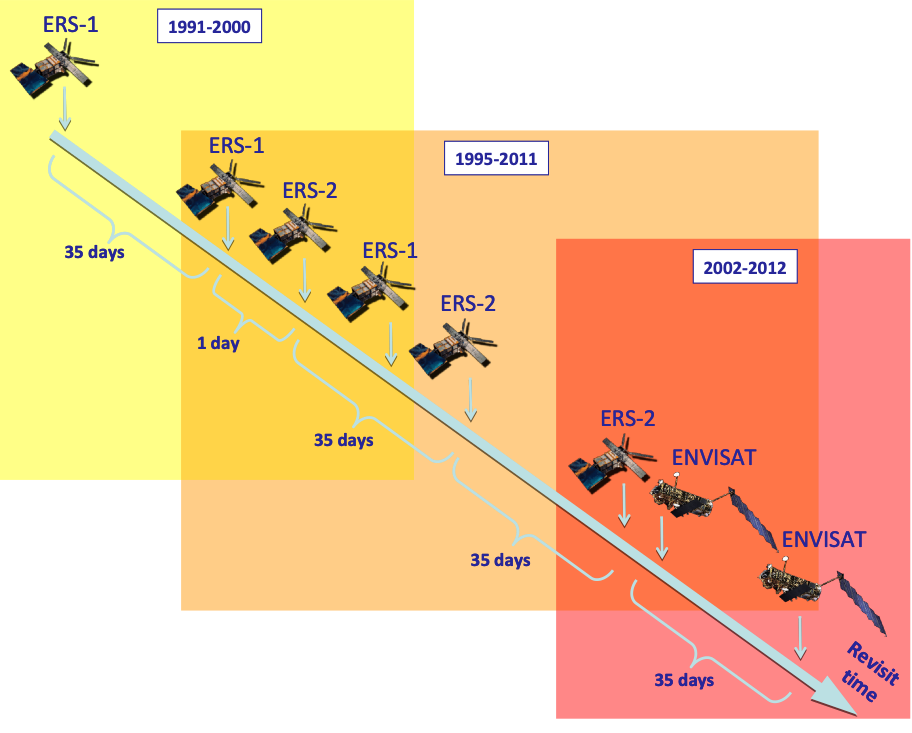 In general, the three ESA satellites were acquired in strip-map mode (see Figure 2) with a spatial resolution of approximately 5 m along the direction parallel to the line of flight (azimuth) and approximately 20 m on the ground. The illuminated area on the ground (swath) had an extent of approximately 100 km along the range (direction perpendicular to the flight line); along the azimuth, the data were acquired continuously for the duration of the orbit (track) during both ascending passages (the satellite runs the orbit from south to north) and descending passages (the satellite runs the orbit from north to south). For the sole purpose of dissemination and use, each track was divided into portions (frames) of equal size to have for each frame an area on the ground of approximately 100 km x 100 km. 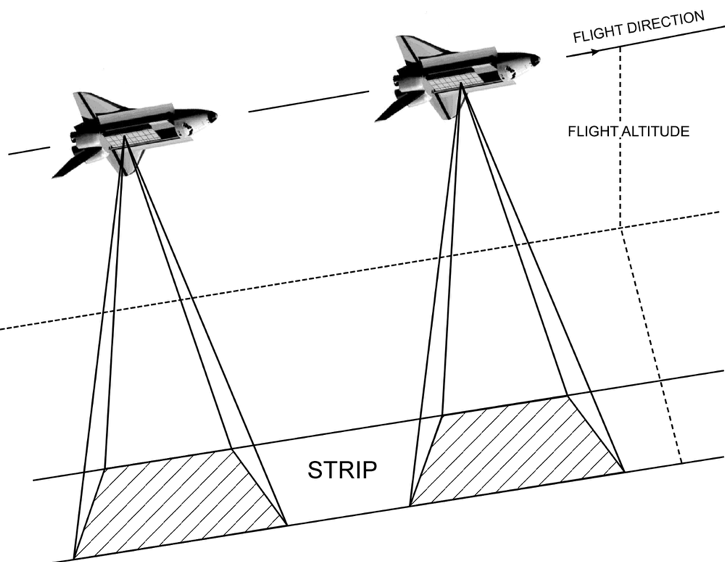 The Sentinel-1 constellation currently consists of 2 satellites in polar orbit with C-band SAR sensors installed on board (wavelength of 5.56 cm). The first satellite, Sentinel-1A (S-1A), was put into orbit on April 3, 2014; the second satellite, Sentinel-1B (S-1B), twin of the first, was put into orbit on April 25, 2016. The interval to revisit the same scene is 12 days for a single satellite of the constellation; this interval will decrease to 6 days when the second satellite starts acquiring images, once the IOV (in orbit validation) and commissioning phases for the verification of the proper functioning of the systems and the radar sensor on board are completed. Figure 3 schematically illustrates the revision interval for the entire constellation.
Sentinel-1 constellation satellites have been designed to acquire data on emerged lands in TOPS (terrain observation by progressive scans) mode (see Figure 4), which allows the collection of interferometric wide swath (IWS) images, with a spatial resolution of approximately 15 m along the direction parallel to the line of flight (azimuth) and approximately 4 m along the direction perpendicular to it (range). The illuminated ground area (slice) has an extent of approximately 200 km (along the azimuth) x 250 km (along the range).
The Sentinel-1 constellation acquires data in programmed mode, with the objective of generating robust image archives, for large portions of the Earth's surface, for long-term monitoring programmes; moreover, it operates with a policy of access to data completely "free and open", thus allowing the establishment of a very large archive of SAR data on almost all emerged lands (and access to this archive) (https://scihub.copernicus.eu/). 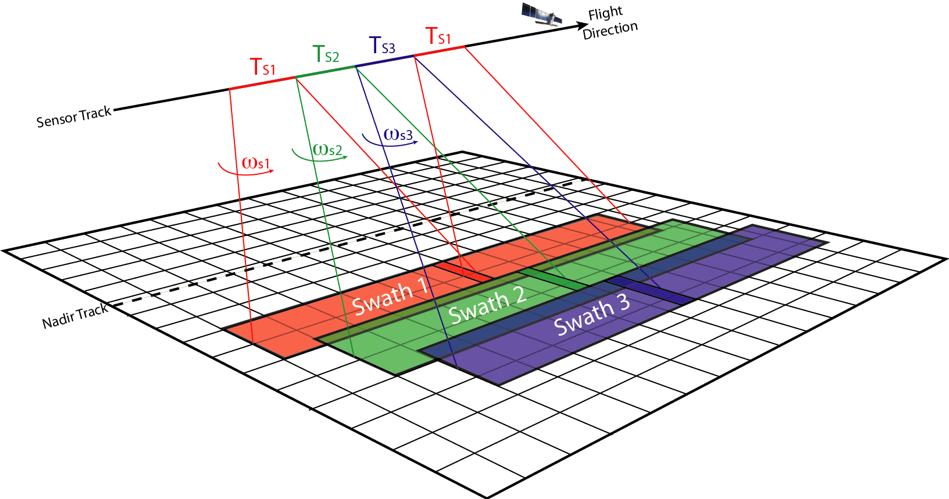