Differential interferometry SAR (synthetic aperture radar), known as the DInSAR technique, or more simply InSAR, is a remote sensing technique that allows measuring the deformations of the Earth's surface starting from the phase difference (interferogram) between two SAR images relative to the observed scene and acquired at different times along two sufficiently close orbits. In particular, this technique makes it possible to detect deformation phenomena that produce variations in the distance of the targets observed by the sensor; it measures the projection of the displacement along the radar line of sight (LOS) with a precision that is a fraction of the wavelength at which the system operates, therefore on the order of a centimetre and in some cases, even a few millimetres (Massonnet et al., 1984; Burgmann et al., 2000; Gabriel et al., 1989; Rosen et al., 2000). 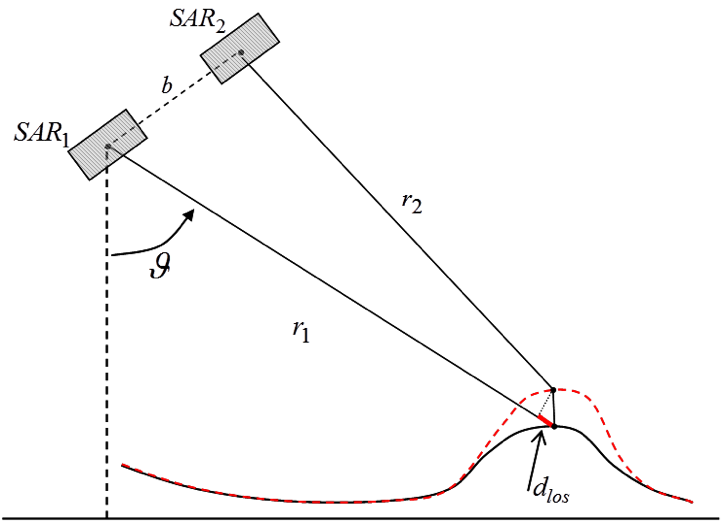 Figure 1 - DInSAR scenario in the plane orthogonal to the flight direction (azimuth). SAR1 and SAR2 indicate the positions of the SAR sensor in the two passages that occurred in the time instants t1 and t2, between which ground deformation occurred (red dotted line). r1 and r2 indicate the sensor-target distance at instants t1 and t2, respectively, θ is the angle of view of the sensor, b is the distance between the two orbits (spatial baseline) along which the two acquisitions occurred and dlos (continuous red line) is the displacement that occurred in the time interval t1-t2 (time baseline) and measured along the line of view of the sensor, called the LOS (line of sight).

The ability of the DInSAR technique to detect the effects produced by individual deformation events (e.g., a volcanic eruption or an earthquake) has been widely demonstrated since the 1990s, and subsequently, the interest of the scientific community and surveillance bodies has focused on the possibility of monitoring the temporal evolution of the deformations identified, especially in areas with highly non-linear dynamics, such as areas subject to hydrocarbon extraction/storage and re-injection of fluids underground.
In this context, in the last fifteen years, several so-called "advanced" interferometric techniques have been developed (to distinguish them from the "classic" DInSAR techniques that involve the production of single interferograms) based on multi-temporal approaches. These techniques, effectively exploiting large datasets consisting of time sequences of SAR images and appropriately choosing the pairs of SAR images to generate the corresponding interferograms, allow producing not only maps of single events but also time series of deformation related to slow phenomena, characterized by displacement rates of a few cm/year (Ferretti et al., 2001; Hooper et al., 2000; Berardino et al., 2002; Lanari et al., 2000; Hooper et al., 2008; Ferretti et al., 2011; Sansosti et al., 2014)).
One of the strengths of the advanced DInSAR techniques that has favoured their development and encouraged their use in various risk scenarios is the accuracy with which it is possible to measure surface displacements: very high accuracies of approximately 1-2 mm/year can be reached for average deformation velocity measurements and approximately 5-10 mm for deformation measurements. Moreover, compared to in situ monitoring techniques, such as levelling, GPS or inclinometers, advanced DInSAR techniques allow the analysis of large portions of the Earth's surface (from several hundred up to tens of thousands of square kilometres), ensuring a high spatial density of the measurement points and thus preserving the characteristics of wide coverage typical of satellite imaging systems. Therefore, in the case of spatially extensive deformation phenomena, such as those potentially related to underground exploitation activities, advanced DInSAR techniques are particularly effective in terms of costs/benefits, especially when compared to the extent of the area that can be analysed.

The SBAS algorithm is an advanced DInSAR technique that allows analysis of the spatio-temporal characteristics of the observed deformation phenomena through the generation of surface deformation maps and time series (Berardino et al., 2002). It is based on an appropriate combination of interferograms obtained from data acquired from sufficiently close orbits (small spatial baselines) and possibly with short revisiting times (small temporal baselines); these characteristics allow minimization of noise effects (called spatial and temporal decorrelation) (Zebker A. and J. Villasenor, 1992),thus increasing the number of points per unit area at which it is possible to provide a reliable measurement of the observed deformation. In addition, all surface displacement measurements refer to a single point in space, chosen in a zone considered stable and to an instant in time, which typically corresponds to the first available acquisition, and refer to the detected surface displacement component projected along the radar LOS.
A crucial aspect of the SBAS approach is to allow DInSAR analysis of surface deformations at two different spatial scales, defined as the regional (medium resolution) and local (full resolution) scales (Lanari et al., 2004; Manunta et al., 2008). At the regional scale, SAR data generated at medium spatial resolution are exploited (with a spatial pixel resolution ranging from 30 m to 100 m, depending on the type of SAR data used) to obtain average velocity maps and historical deformation series related to areas extending over several tens of thousands of square kilometres. At the local scale, the technique instead uses SAR data generated at full spatial resolution (spatial resolution of even a few metres) for detailed analysis in sensitive areas, allowing the detection of deformation phenomena, even those that are very localized spatially, related to buildings or individual structures.
A further development of the SBAS technique involves the possibility of generating very long historical deformation series of approximately twenty years using SAR data related to the same ground scene and acquired by different but geometrically compatible sensors, as in the case of ERS-1, ERS-2 and ENVISAT sensors of the European Space Agency (ESA). In particular, the SBAS multi-sensor approach can be applied to both the regional and local scales to study slow deformation phenomena over long time intervals and reconstruct their evolution in the past (back-analysis), making the most of the large archives of SAR data collected by the two radar systems from 1992 to 2010 (Pepe et al., 2005; Bonano et al., 2012).
Moreover, the SBAS technique allows obtaining average velocity maps and historical deformation series, with accuracies of approximately 1-2 mm/year and 5-10 mm for average deformation velocity measurements and individual displacement measurements, respectively (Casu et al., 2006; Bonano et al., 2013). 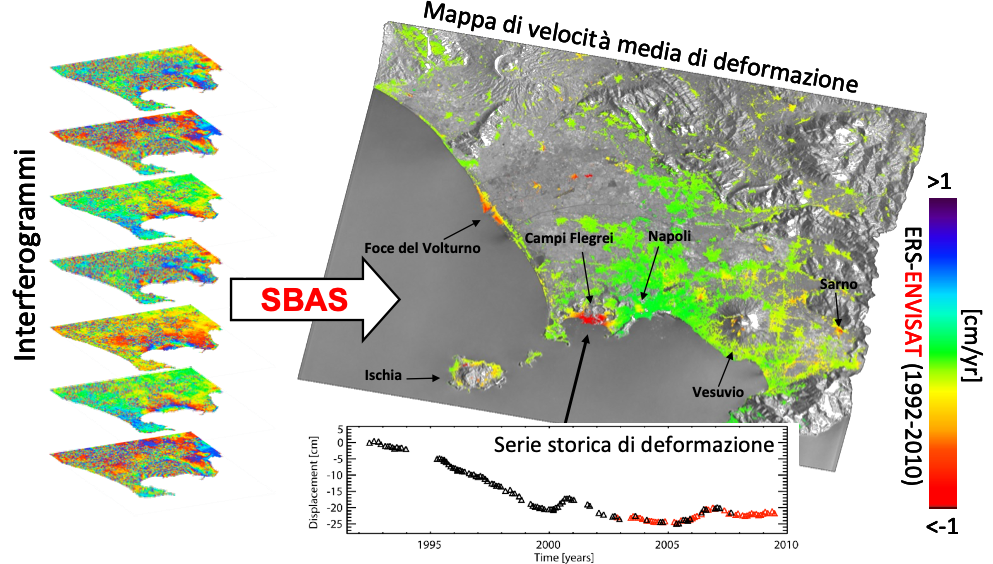 Recently, a parallel version of this technique has been developed, known as parallel SBAS (P-SBAS). P-SBAS exploits distributed computing infrastructures (cluster, grid, cloud) using multi-core and multi-node programming techniques; it is therefore able to perform the processing of large quantities of SAR data, significantly reducing the calculation time compared to the original sequential version of the SBAS approach (Casu et al., 2014; Zinno et al., 2015; Zinno et al., 2016; Zinno et al., 2017; De Luca et al., 2017). The P-SBAS technique, which is able to efficiently exploit distributed computing infrastructures, allows the creation of advanced satellite services based on the automatic update of historical deformation series when new acquisitions are available. This type of application is particularly relevant when used in combination with SAR data from the European constellation Sentinel-1 (Zinno et al., 2018; Manunta et al., 2019), which acquires SAR images with global coverage on a weekly basis. This result, in fact, holds enormous relevance in the application of satellite techniques for land monitoring and environmental risk management, as it allows the use of the radar data processing chain not only in the scientific field but also in increasingly operational contexts (pre-alert phase and under emergency conditions), such as monitoring soil deformation phenomena (of natural or anthropogenic origin) and evaluating and mitigating the risks associated with them.
The SBAS technique and its most recent evolution P-SBAS are able to exploit the most widespread satellite data currently available. They involve an established technique, successfully tested using data first acquired from ESA's ERS-1/2, ENVISAT satellites (known as first-generation sensors, with space coverage on the order of a hundred kilometres, monthly revisit time and spatial resolution on the order of ten metres) and by second-generation constellations (having narrower spatial coverage but shorter revisit times of less than ten days and higher spatial resolution, on the order of metres) COSMO-SkyMed and TerraSAR-X of the Italian Space Agency (ASI) and German Space Agency (DLR), respectively. These data have been used for analysing the deformations of volcanic buildings on Etna and Vesuvius and of the Campi Flegrei and Long Valley (California, USA) calderas, the deformations related to the seismic events at L'Aquila (April 6, 2009) and Emilia (May 20 and 29, 2012) and various urban areas (Naples, Rome, Los Angeles, etc.), and those of areas subject to landslide phenomena (Maratea, Assisi, Mud, etc.). Recently, the SBAS technique has been applied to data collected by the constellation Sentinel-1, composed of twin sensors Sentinel-1A and Sentinel-1B, placed into orbit in April 2014 and April 2016, respectively, for the analysis of co-seismic deformations related to the earthquakes of Gorkha (Nepal) on April 25, 2015, and Illapel (Chile) on September 16, 2015.