The MiSE Guidelines for Monitoring (MiSE-UNMIG, 2014) suggest defining two domains, called respectively the Internal Domain and the Extended Domain of detection, as reference for monitoring. The ILGs associate the following meaning to these two domains.
The Internal Detection Domain (ID) defines "...the volume within which induced seismicity or ground deformation associated with the activity is expected to occur. It represents the reference volume for which seismicity and ground deformation phenomena will be identified, monitored and analysed with the highest sensitivity. For underground gas storage activities, it is the volume comprising the mineralised zone (reservoir used for storage), as reconstructed by the preliminary geological study, and a further band around the reservoir up to a distance of 2-3 km, depending on the extent of the reservoir."
The Extended Detection Domain (ED) defines "... the volume surrounding the Internal Detection Domain that includes a larger portion of the Earth's crust, in order to better define and contextualise the monitored phenomena. For all activities, it is suggested that it extends beyond the Internal Domain of detection for a band of width between 5-10 km, taking into account the size of the reservoir and type of activity".
For the monitoring of the Cornegliano Laudense reservoir, considering that the natural seismicity of the area is mainly associated with deep geological structures (see Initial Activity Report) and considering the high level of anthropisation in the Po Valley, a third, larger domain has been defined, called the Outer Domain (or Outer Area) of detection, which is used to characterise the background seismicity in the area surrounding the reservoir and contextualise it with respect to the geological-structural and seismotectonic structure.

The detection domains of the Cornegliano Laudense monitoring are defined as follows, referring to the Storage Centre (Cluster A) as the central point and assigning the reservoir depth the conventional value of 1.4 km:

The areas corresponding in surface to the survey Domains introduced above are shown in Figure 1: in red the Internal and Extended Domains and in black the External Area. 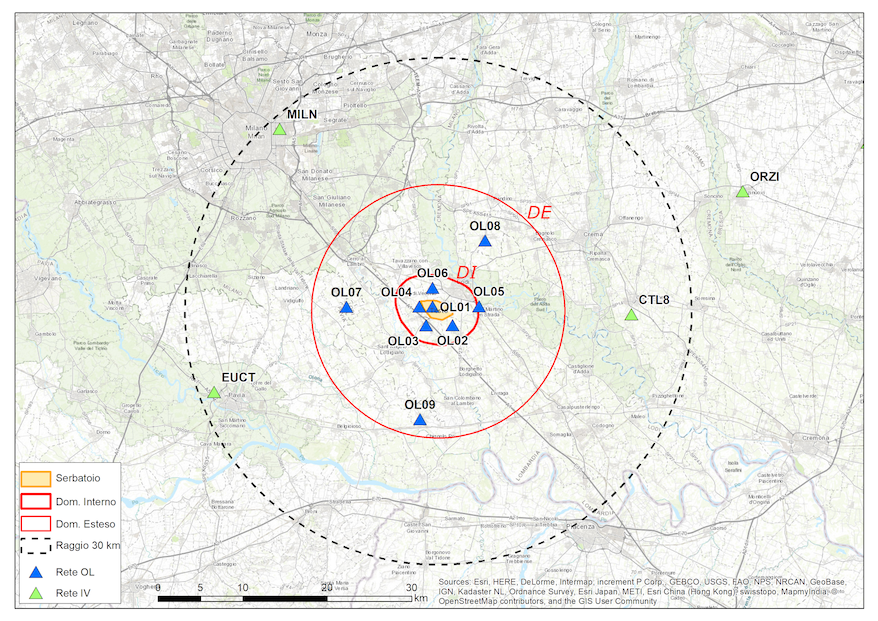 Figure 1 - The blue and green triangles indicate the RSCL and National Centralised Seismic Network stations, respectively, used to integrate the surveys. The yellow area in the centre indicates the surface projection of the reservoir. The red lines indicate the perimeters of the Internal Domain (DI, thick line) and the Extended Domain (DE, thin line) of detection. The dashed line indicates the Outer Area, corresponding to the distance of 30 km from the storage site.