The seismicity detected before the start of storage activities serves to assess the natural background seismicity under "undisturbed" conditions. Two premises are important. The first premise is that in every area of the world, there is natural seismicity, possibly very weak but always present; this is due to the tectonic stress to which the Earth's crust is everywhere subjected, at large and small scales, due to the movements of tectonic plates. The second premise is that the completeness of the detected phenomenology depends on the detection system, which in our case is the seismic monitoring network: the more sensitive the network, the more seismic events will be detected. Thus, it is easy to understand why the new Cornegliano Laudense Seismic Network (RSCL) is expected to detect very weak seismicity even in a region such as the Lodi area, where the national network normally detects only very few events.

MiSE's Addresses and Monitoring Guidelines suggest detecting background seismicity for a period of at least one year. With the Cornegliano Laudense monitoring system in place, the pre-activity detection period lasted 23 months (from January 1, 2017 to December 2018, when storage activities began).

In the period 1/1/2017-31/11/2018, the RSCL detected a total of 11 events in the External Area of detection, corresponding to the area contained within a radius of 30 km from the storage site. The event parameters are summarized in Table 1 and mapped in Figure 1.

Table 1 - List of events localized by the RSCL in the period 1/1/2017-30/11/2018 up to approximately 30 km from the town of Cornegliano Laudense. The columns contain, in order, the area where the event was located; the year-month-day date; the time; the latitude and longitude, in decimal degrees; the depth (in km); the magnitude ML; the quality of the localization (decreasing from A to D); the total number of phases used; the number of S phases used; the statistical errors of the localization, in km, for the two horizontal components and the vertical component, as defined by the HypoEllipse method. The colours used in the table indicate different depth classes, similar to what is represented in Figure 1, namely, red 0-5 km, orange 5-10 km, blue 30-35 km, and blue 35-40 km. 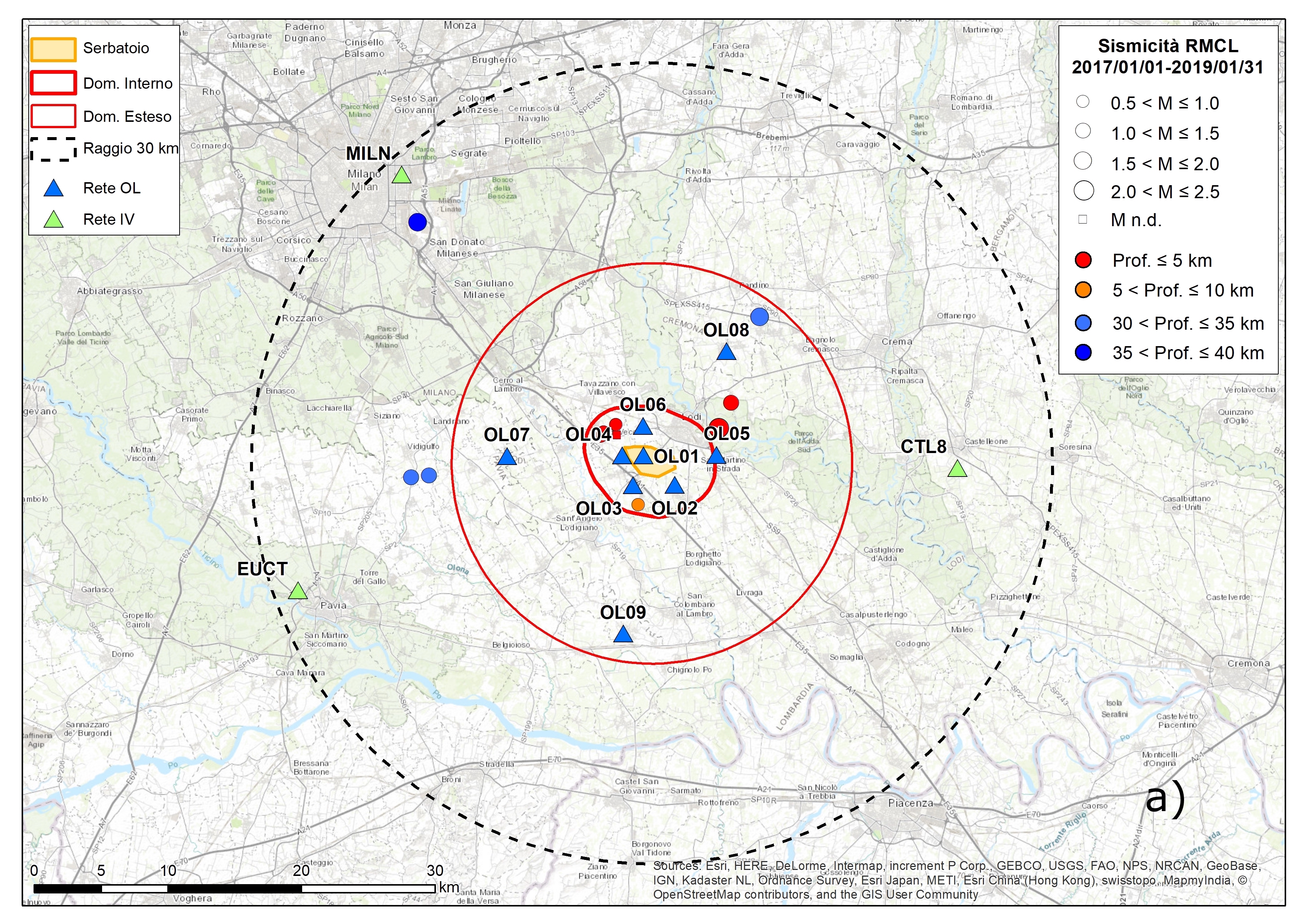 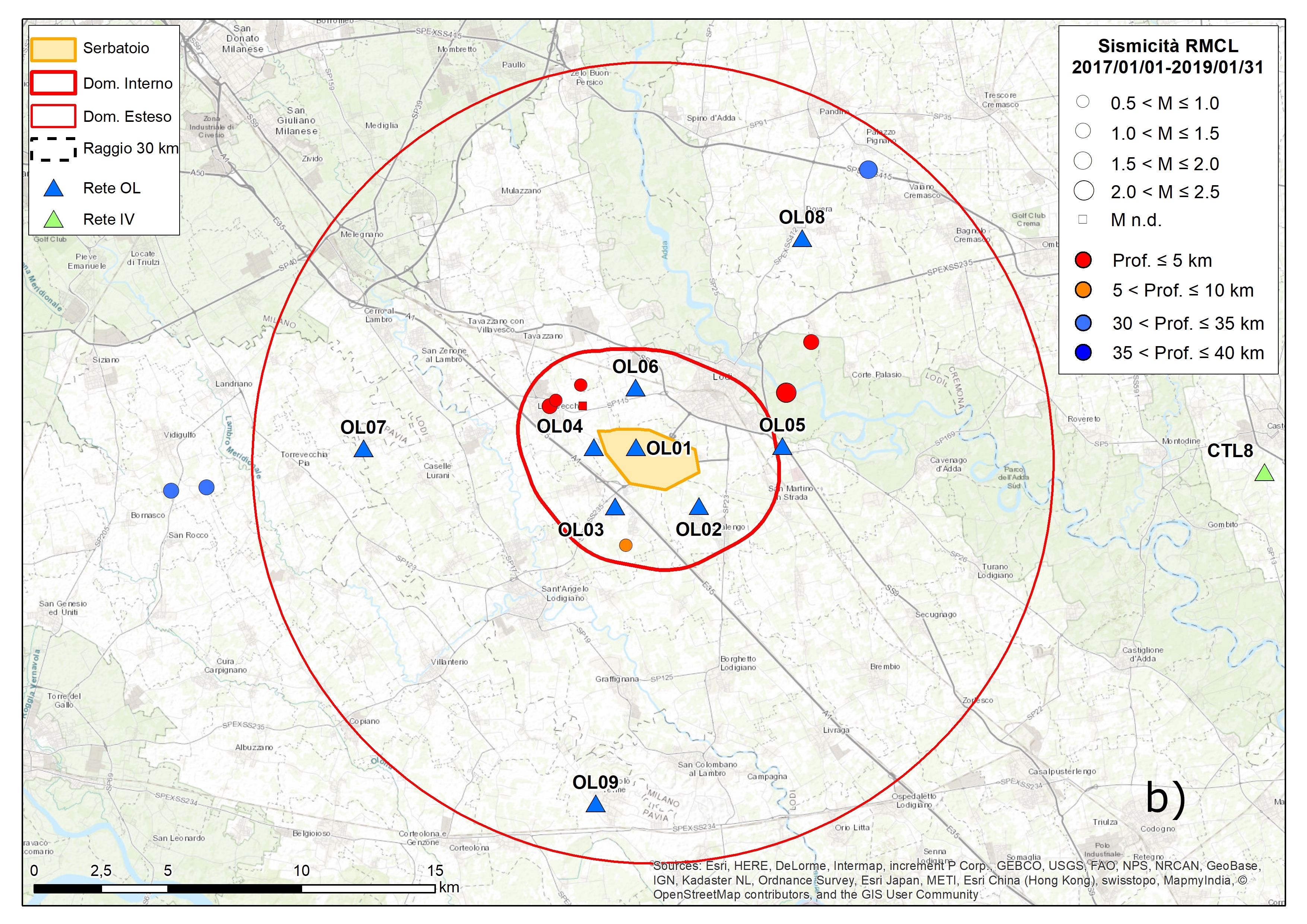 Figure 1 - Map of events located by the RSCL in the period 1/1/2017-31/11/2018, at a distance within approximately 30 km from the storage site (panel a) and at a more detailed scale (panel b). The epicentres are represented with solid red circles with sizes proportional to magnitudes; the coloured triangles represent the stations belonging to the different scientific institutions; the black dotted circle, centred on the storage site and with a radius of 30 km, represents the External Area of detection. Other details are provided in the legends.

One may note that:
• Four events were deep (30-40 km) and definitely tectonic in nature. The first of these (23/5/2017 at 04:16:32) was located on the edge of the External Area AE, near Milan; it was approximately 38 km deep, had a low magnitude (ML 1.9), and was also detected by the Centralized National Seismic Network. The other three deep events had hypocentres approximately under the perimeter of the Extended Domain (DE), in different directions from the storage plant area, and low magnitudes (between 1.3 and 2.0). These events were not detected by the National Network.
• One event (ML 0.7 on 27/5/2018 at 20:01:35) had a depth of 5.7 km and was located at a small epicentral distance from the storage centre. The hypocentre was located in the DE but relatively close to the edge of the volume of the DI Inner Domain and could be located in the superficial portions of the tectonic structures present beneath the sediments of the Po Valley.
• The remaining 6 events were all superficial, with depths between 1.2 and 3.6 km. Four of these events occurred in the Inner Domain at distances of less than 3 km from the reservoir, while 1 occurred in the Extended Domain, approximately 7 km from the outer perimeter of the reservoir, towards the SE. Note also that 2 of the superficial events had no optimal localization qualities (B for the event of 11/7/2017 at 22:25:03 and C for the event of 20/10/2017 at 21:37:06).

The interpretation we give of these events, which, we stress, all have very low magnitudes, is the following. Normally, the seismogenic layer, i.e., the portion of the Earth's crust able to accumulate tectonic stresses and generate earthquakes, is located at depths greater than 4-5 km. In the Po Valley in the Lodi area, the anticline structures of the northern Apennine front, which are buried under the alluvial sediments, can locally reach approximately one kilometre deep. All the events that occurred, as a consequence, are compatible with tectonic causes. For the more superficial events close to the reservoir, in this case, the 4 events that occurred in the Inner Domain were all very weak, and it cannot be excluded that the motion detected was due to some activity carried out underground during the construction of the storage plant (for example, leakage tests of wells). Surely, these were not microevents induced by storage because this activity had not yet started. However, whatever the cause of these microevents, the surveys carried out in the period prior to the start of the storage activity confirm very weak seismicity in the monitored area, substantially in line with the danger assumed by the regulations (see "Seismotectonic Classification"), and the quality improvement of the monitoring obtained with the RSCL, which is able to detect weak events with magnitudes less than 1.